You are here: Home / EuroMillions and the El Millón Raffle Spain

‘Euromilliones’ is a favorite word in Spain. It is the name of a very popular Spanish lottery in which you can win millions of euros! Of course you have to be very lucky to win, but the past has shown it’s definitely possible! Every Euromilliones El Raffle player has to select five numbers out of a 1 to 50 range and a two stars out of a 1 to 11 range. 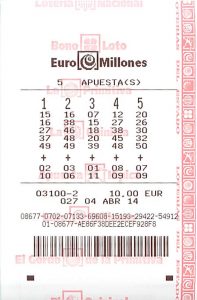 YES!!! you buy the car of EuroMillions lottery tickets instantly gives the time to win the Spanish bi-weekly raffle known as El Millón (The Million). You’re in this exciting raffle action since your EuroMillions tickets are ordered by our local offices in The country.

A ticket for Euromilliones is not expensive, just 2 euros. This is why a lot of Spanish people try test their luck in this lottery at least once. Nowadays it’s easier than ever to select the numbers of Euromillions. You only have to visit the website loteriasyapuestas.es to select your five favorite numbers and two stars that hopefully will make you very rich. You have to select the numbers for each bet manually or completely random. In the last case a system randomly selects numbers for you. This is a good option if you find it difficult to choose.

Two draws every week in Spain

Euromillions organizes two draws, one on Tuesday and one on Friday. Both draws are always very exciting. The validation of your ticket depends in which you draw you participate in. For example, a validation of your ticket between Saturday and Tuesday means that you participate in the draw on Tuesday. If the validation is between Wednesday and Friday, the Friday draw can be your big moment. Perhaps you like to participate in both draws because it increases your winning odds. Select this optin when you purchase a Euromilliones ticket. Your ticket has the same numbers and stars for each draw.

Choose between a single or multiple bet
Perhaps you like to place several bets to increase your winning chances. At Euromillions you can do this in two ways, namely ‘single’ and ‘multiple’. A single bet means that you place at least one bet and a maximum of five bets on the same ticket. Each bet has five numbers and two stars. Each ticket has a block. To place the first bet you have choose five numbers and two stars. The second bet has five numbers and two stars in the second block as well, and so on. It’s also possible to place a multiple bet. It means that you place a bet with more than five numbers. The maximum number of stars is five. You have to mark these numbers in the first block of your ticket. Be aware of the fact that how more numbers you choose, how more you have to pay for the bet. You can choose the following scheme to make a multiple bet at Euromilliones:

No bonuscode needed just visit the page above.